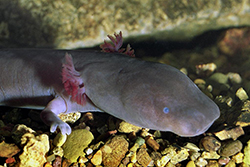 This morphologically most distinct of all Proteus populations, discovered in 1986, is limited to the cave system behind of only ten karst springs in Bela Krajina, South East Slovenia, an area encompassing less than 30 km2. The black Proteus is indeed highly endangered; even a relatively small local pollution incident could have a devastating impact on the entire population, and thus its global existence.

Since 2002, seven of these extremely rare amphibians are maintained and studied in this laboratory. Support for an ex situ breeding program is urgently needed.